Sarah was our daughter. Sarah was a beautiful girl that grew into a young lady. Sarah was in a sudden and tragic accident that left her in a coma for several weeks before she finally succumbed to her injuries and passed away.

This website is for us, her parents, to write and express emotions and remind ourselves of her wonderful loving beauty.

Sarah had a number of hobbies, as any girl would. She loved games. We played the usual range of board games as a family with her when she was a child. Her favourite games were Monopoly and Operation. As she grew she grew to love some of the big computer games, probably so that she could spend time with her brother who was obsessed by these games.

For a time she expressed a desire to become a game programmer or developer as a profession. Ultimately she grew out of this – not being able to code seemed like a constraint – but for a time she investigated software development as a topic of study and then profession. For reasons that we did not quite grasp, it seems that she liked the idea of developing online gambling games, such as slots, and so looked into finding a job in igaming, both in the UK and in the major hub for igaming jobs Malta, but this never became her ultimate occupation.

When Sarah was in her coma, we once again played Monopoly with her, this time with us all sat around her bed and the board across her legs. We found it difficult to try and simply sit and talk to her for hours on end, so instead we reverted to what we knew as a family. We took it in turns to roll the dice on her behalf and spoke to her constantly as we played. There were times when the nurses could see brain movement on their monitors, so we knew that she could hear us and was involved. To show just how important luck is to success at Monopoly, on one afternoon Sarah came close to beating the rest of us as a family, while in her coma!

It was strangely ironic to us that Sarah ended up in a coma because in life she was always interested in her mind, her emotions and how she made decisions. At the end, we were monitoring her mind and it’s workings even more closely, more obsessively, than she ever had. Based on this interest, she had read widely about psychology, hypnosis and hypnotherapy. In fact, she had spent time with several hypnotherapists in London. They helped her understand her emotions better, one was even a specialist stop smoking hypnotherapist – and it worked. After that she didn’t smoke for two years until her death.

Sarah loved to be outdoors and to play sports. As a child she was an excellent swimmer and that continued into adulthood. She was never particularly fast in the water, but she was strong and could swim and swim and swim. She swam one mile twice per week in the local pool for years as a young woman. We were very proud of her. 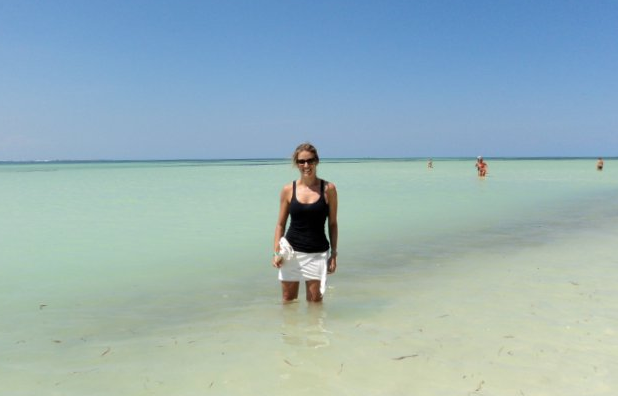 This love of the water lead her to enjoy scuba diving. She dived on trips in the Cayman Islands and Thailand and loved the experiences. Had she lived, she would have probably covered the globe in her desire to dive and explore underwater. On one trip she took a course in freediving in Gozo where she spent one week meditating, relaxing and practising. As parents, we hated all of these dives, but honestly, if someone as comfortable and strong a swimmer as Sarah were to struggle, then almost every other diver on earth would have been in trouble too.

The combination of the water and the requirement to relax very deeply and control the mind and body really appealed to her. As we understand it, freediving is much more dangerous than normal scuba diving. She was not attracted to that danger and we believed that she would always swim and dive within her limits, but they are still worrying days for parents.

Ultimately Sarah worked in real estate for several years. Initially, this began as a love of meeting people, an interest in architecture and a desire to earn a decent living. Over time the love of architecture left her, but by then Sarah had become an accomplished saleswoman who was very adept at putting people at ease and closing deals. She made a very acceptable income and would probably have continued to do so for many more years.

Her interest in property had begun with wanting to visit nice buildings. As you might imagine, nice old buildings are not usually easy to rent out or sell. As her business instincts sharpened, she realised that commercial property was where the money really was and so she began to specialise. She was very successful at it and we were incredibly proud of her dedication, knowledge and tenacity.

As a parent, you hope to raise children that will be able to look after themselves and make their way in the world and find happiness. We certainly raised a young lady that could look after herself in business and that made us very proud.

When it comes down to it, the human body is surprisingly robust – we can mistreat it for years with alcohol or cigarettes and it just goes on working. The human body is also surprisingly fragile and if one of a few key areas is damaged, then there can be little that our modern healthcare systems can do to fix or repair it.

Sadly, Sarah was in a car accident – as a front seat passenger – and it was from this accident that her injuries occurred. As far as we can tell, there was little reason to blame the driver – an animal leapt out in front of the car at night causing a swerve and the accident – while we despair of thinking about how preventable it was every day, the reality is that could have happened to me, or us, or you, or almost anyone and there would have been very little that any of us could have done about it in the moment. Our reactions are what our reactions are.

If nothing else, having read this far, please just take this as a lesson to seize the day, live your fullest because none of us knows just how fragile our life may be. Bless you and God speed.